Message to the 4 million visitors to our website each year:

Oil Price Spike:  Watch out for another massive oil price spike. It started today from $56/bbl and we expect $100/bbl by year end. The safest investment at the moment is oil, gas and coal company stocks or holdings or physical oil.

Property Price and Oil Price Link: We believe if oil prices stayed permanently at less then $50/bbl this would give a big economic stimulus to western oil importing nations. However, as oil prices rise, the 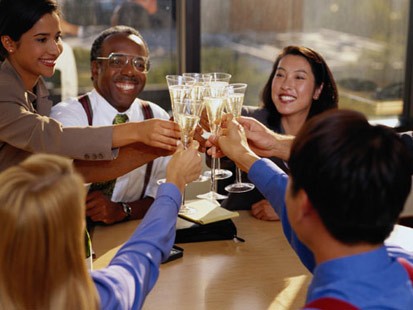 deficits of oil exporting nations increases as does inflation and hence interest rates. This creates $overall economic hardship as oil prices rise  unemployment will rise, property price will stay flat or decline, taxes will rise and peoples disposable incomes will drop. We are stressing the link between oil prices and property prices again. Converse to this is that  overall  if oil prices rise, it is often because of strong demand implying strong GDP economic growth. But there are two dangers here:

2.    Oil shortages - It is still possible oil prices can skyrocket whilst the global economy goes into recession if/when post Peak Oil$ oil shortages occur. Hence despite demand destruction, the overall demand is still higher than a rapidly declining global oil supply  this is crisis territory where all bets are off on property prices  it very much implies a prolonged downward property price movement for all nations that important large amounts of oil (gas and coal).

Currently the UK produces about 70% of its oil and gas needs  no bad for a western nation  its days of Sterling being a Petrocurrency are over though. The USA imports about half its oil needs and produces all its own gas and coal  so despite many stories, if it was able to reduce the average car gas consumption from 22 mpg to 44 mpg, it would barely be importing any oil. It has huge coal and gas reserves. So overall, in a post Peak Oil era  with change  it is capable of withstanding a large blow because it has alternatives, even with a massive planned expansion in wind energy and to a less extent solar. But it needs to change  and change fast to escape the worst effects of Peak Oil  and the subsequent oil supply decline. 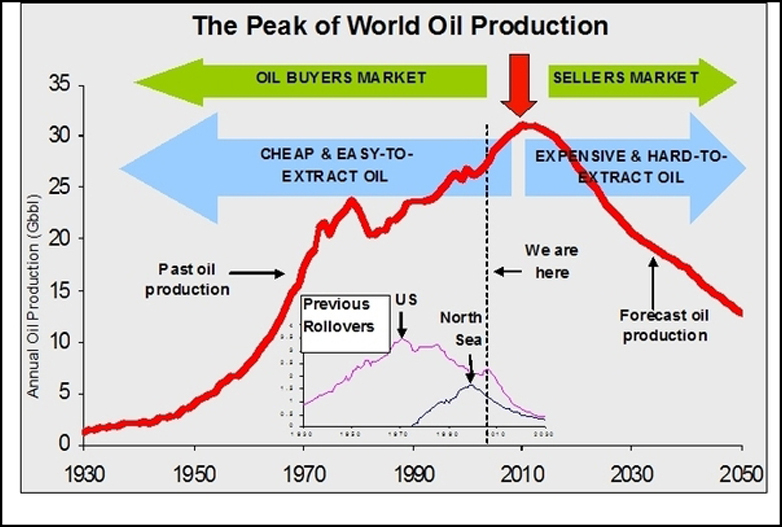 Peak Oil Behind Us:  As previously advised, we believe Peak Oil was July 2008. The world is on an irreversible decline in oil production. The tightening of stocks will start in the next few weeks as demand picks up because of low prices and the $2 Trillion of US stimuli, plus another $1 Trillion from other countries. All those optimistic people that think tightening of oil supplies will happen in 5-10 years time we believe are wrong. We have detailed global oil production models for all countries to support our view based on many years of research. We are talking months - no year to skyrocketing oil prices.

Inflation: The gigantic financial stimuli from Western government will fan the flames of inflation. When inflation takes hold, the only safe place to be will be in oil, gas coal or gold. Please heed our advice on this. At least we would like to forewarn you.

We are neutral on property at the moment. Yes, prices have dropped quite significantly in the UK and USA, but they probably have another 5 to 10% further to drop before they reach bottom. As previously advised, we think the bottom of the housing market will be in September for the UK, and in the next few months for the USA. 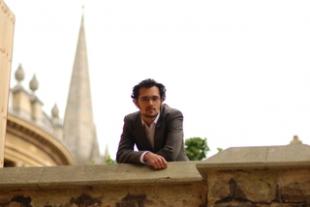 Investing in Oil, Gas, Coal:  But the big money making opportunity lies in oil, gas, coal and gold. In summary, the world is running short of low cost energy.

·         The oil and gas engineering and petroleum workforce are aging  over 50% will retire in the next ten years  skills are short and in ten years the shortage will compound the crisis - only minimal efforts are being made to recruit young engineers - in any case, most graduates would rather work in banking, finance or media/services.

·         Non conventional oil such as oil sands is very expensive and energy intensive to extract  the environmental lobby and emissions issues will slow down development this will not stop the world from declining oil production.

·         Natural gas liquids are increasing in production, but not enough to offset conventional oil supplies  much of this increase in gas liquids is from the blow down of depleted oil fields  not a good sign  rather a further indicating of aging oil fields

·         The vast majority of oil reserves that have not yet been developed are in countries that are not openly receptive to western oil company investment  and do not favour accelerating oil production  most of the countries also have big pressure for investments in social-health-welfare of their people, and investment in their oil industry often takes second priority

·         New technology that help accelerate oil production in the period 1980-2000a are losing their impact (3D seismic, horizontal drilling, multi-lateral wells, water injection, electric submersible pumps, subsea wells, deepwater drilling)  there are few new technologies that are having such a big impact from 2000 onwards.

·         Deepwater developments are very expensive, high risk and take at least five years to develop  the biggest deepwater discoveries have been made.

·         The twin shocks of the credit crunch (financial crisis) and low oil prices for a short period have cause many projects to be delayed or cancelled. It will take years to get these projects going again.

·         OPEC claims to have cut production by 4.2 million bbls/day  with 80% compliance this is about 3.3 million barrels off the market. However, we believe with the steep underlying hidden declines in oil production now taking place, this cushion will be used up within 12 months leading to tightening supplies by year end. As demand increased end 2009 and there is no ability to raise production, it will take 6-12 months before it becomes very obvious that we have an oil supply crunch on our hands, like we had April to July 2008 that in large part lead to prices skyrocketing from $100 to $147/bbl  before causing the biggest recession since the 1930s.

·         Yes  we believe the high oil prices lead the world into a recession  and the world will find it difficult to grow with oil prices over $100/bbl. And yes, this is gloomy.

·         Its too late to avoid the crisis  there are no developed alternatives to the massive oil, gas and coal usage  too many years have been wasted watching the problem get worse. It will take at least five years to shift away from our massive reliance on imported oil  70% of oil is used from transportation. The average US car does a ridiculously low 22 mpg. To many years of wasting a precious resource will come back to haunt us all unfortunately.

·         The is no alternative to kerosene for airline fuel  yet tax on airline travel is almost nonexistent  does this make sense?

Easy Oil is Finished:  Overall, the easy oil has been produced and the difficult oil costs over $20/bbl to 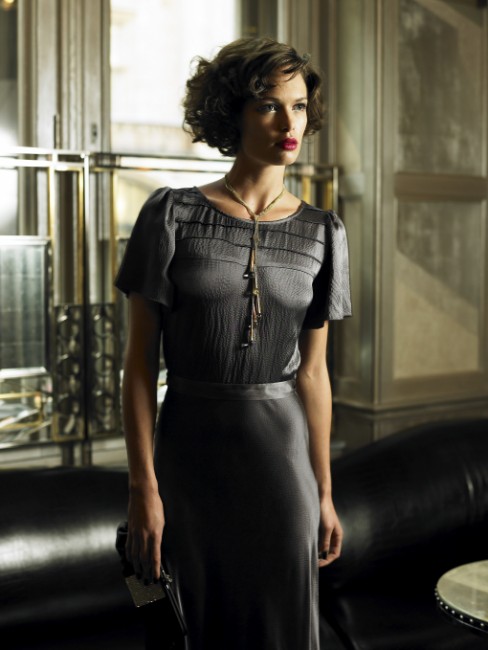 And conversely, one needs to be careful with downstream  companies such as:

These often have reduced profits when oil, gas and coal prices rise.

Instead of buying physical oil, which is difficult for the normal investor, one can purchase shares in companies that have assets in the exploration, development and/or production phases of the upstream oil supply business. Companies with large reserves, large production, exciting new and large exploration prospects with a low price to earnings ratio are the best to focus on. It is always a balance between exiting exploration companies with high P/E ratio (range 15-60+ or no earnings), versus steady oil production companies with lower P/E ratios (range 5-15). If you think gas prices will rise, purchase company stock that have a lot of gas production. If you think oil prices will rise, purchase company stock with significant oil production and potential oil production growth in future years.

In summary, if you believe in Peak Oil and higher oil, gas and coal prices through the next 1-5 years (as we do) then its best to get into stock in oil/gas/coal upstream "exploration, development and/or production". The companies with the largest booked reserves with lowest share price are the ones to particularly look out for.

Crash then Boom:  Yes, oil prices have crashed from $147/bbl in July 2008 to $35/bbl in Oct 2008. They have since recovered to $55/bbl  the big rises have just started to kick in. Expect prices to climb to $100/bbl by end 2009. And with it an average assortment of upstream oil, gas and coal stocks to rise by about 30% by year end. And when inflation starts rearing its ugly head again, the best place to be will be in oil, gas and coal upstream.

What to Avoid: Just to flag, if oil/gas/coal prices skyrocket again, then the following industries will be severely hit - and the economic prosperity of areas that depend on these industries for jobs. 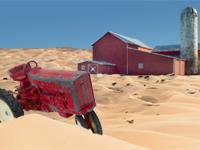 This of course will hit property prices in these areas: 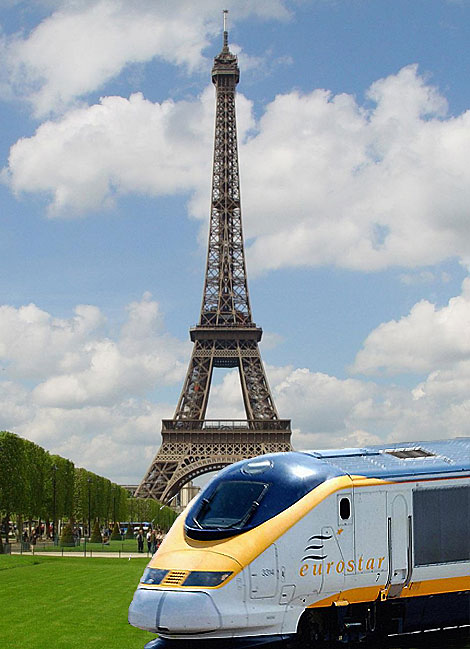 Industries that well benefit: at the airline and automotive industries expense are:

Other industries that often do less well with high oil/gas/coal prices - because their raw materials prices skyrocket whilst they cannot pass on all of this to their customers, are:

Integrated Oil Companies: Unless you understand these dynamics of the su 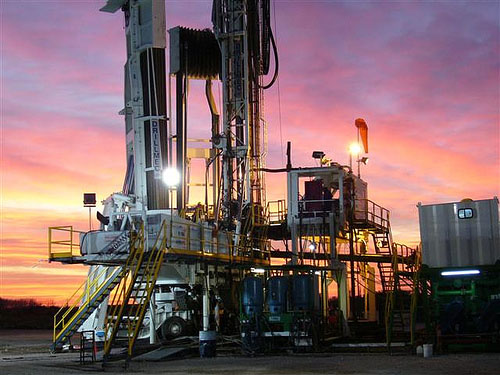 pply-demand within these industries in the middle of the supply chain, best avoid if oil prices rise. That said, many so call integrated oil companies have components of these business within their overall portfolio. So if oil prices rise sharply, as long as the total capital employed in these business are less than say 40-50% of these companies, you will normally find these integrated oil companies share prices rising strongly as well - particularly if they have large oil reserves and large oil production per capital value of the company  (barrels of proven oil reserves per $ share price being a measure one can use to judge this).

Oil Exporting Nations - Property: Globally, one will find that property prices in all oil exporting nations will generally see rises as oil prices skyrocket. The converse is true for oil importing nations - particularly if they import all their oil, gas, coal and metals for electricity production and car fuel/power. Examples of companies that export huge quantities of oil/gas per population that are also very stable politically are Norway and Canada with Australia being next behind (huge metals reserves). Developed countries most exposed to very high oil, gas and coal prices that have little nuclear power also, are:  Italy, Spain, Greece, South Korea, most eastern European countries - Croatia and Slovenia being two example (no coal production or oil/gas production). For more details, refer to Special Reports