688: Coronavirus Update England in Crisis and Vaccinations Seem To Be The Only Hope

UK Coronavirus Crisis: The UK has been the worst affected country in the world for COVID-19  per capita in the last few months. There was the second wave that started in Oct 2020 then a step up further in late December as the Kent variant caused havoc in SE England. Out of all countries around the world, it seems England has had the worst performance in killing the virus off.

Blame Game: Some people have blames the flip flop of government restriction or lack of clarify on the restrictions  this ha not helped. But regrettably the answer is probably down to individuals around the country and how they have behaved compared to people in other developed n 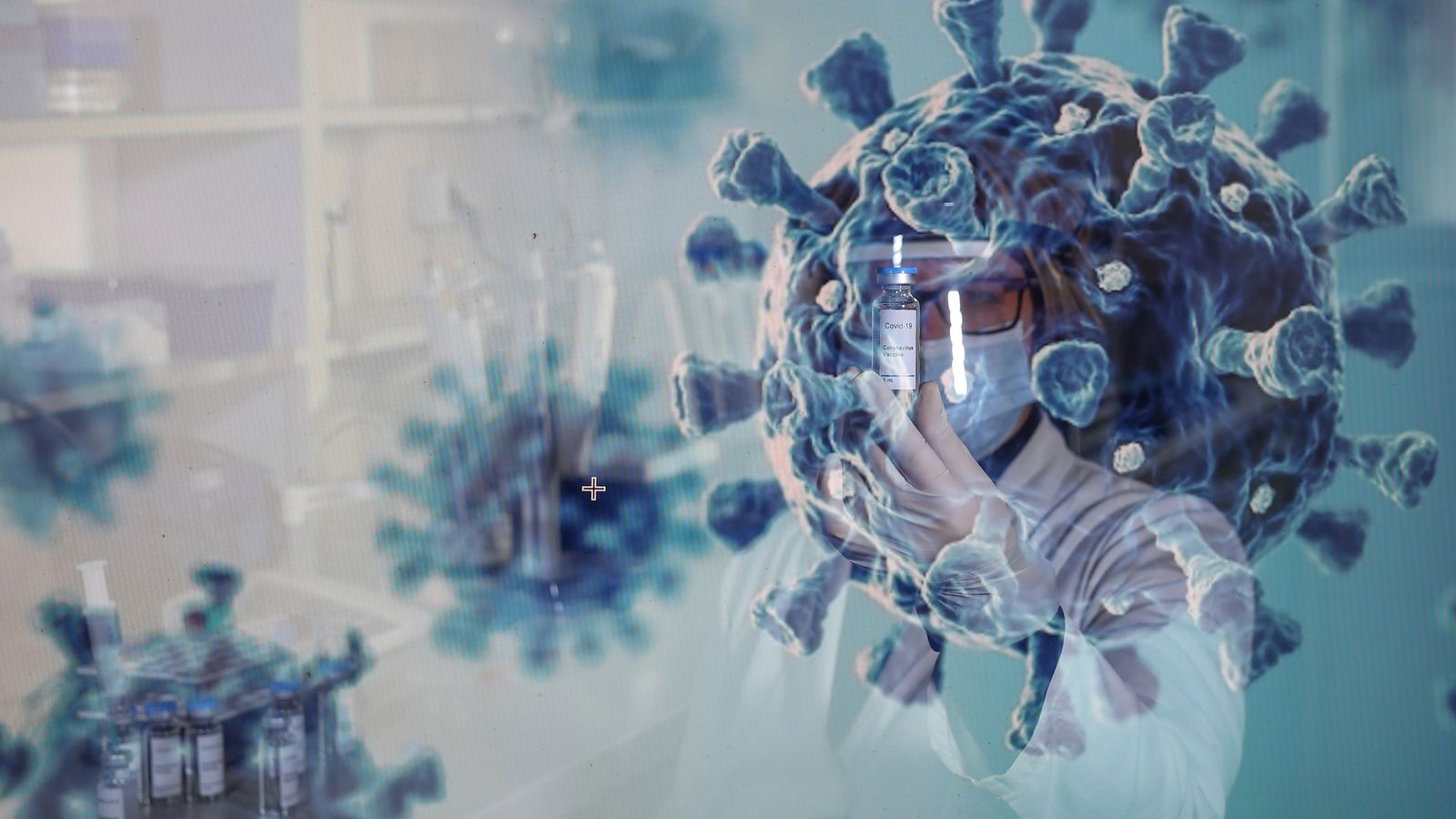 UK Should Be No Different to Other Developed Nations: England has a disadvantage in that there are densely populated industrial areas. But this is also true of Holland and Belgium that seem to have about a quarter of the cases compared to England. Paris has a density of population four times that of London but cases have been far less. The UK is a relatively wealth developed nation so it should have controlled the virus like other peer countries like France, Germany and Italy. Indeed, the UK is an island so this should be an advantage.

Compliance: Many people have not been wearing masks  for instance on the London tube  compliance to the regulations has been shoddy in many area. Lockdown and restrictions fatigue is evi 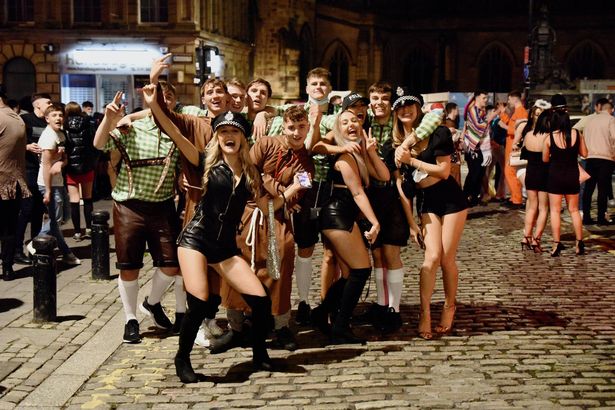 dent. If you wear a mask  it mainly helps other people rather than yourself  prevent you from distributing droplets of virus in moisture within the air. So people not wearing masks on the tube and in supermarkets is selfish. The young thinking it wont affect them is also selfish towards older people. Blaming lack of clarity of restrictions for not wearing masks or meeting friends and partying (or Dominic Cummings as we seem to hear oh so often) is abdicating personal responsibility.  In France during their lockdown you needed a note to be able to leave your flat. Things have been far more lax in the UK  and the spread of COVID-19 is regrettably the outcome. We frankly dont know anyone that has not bent a regulation on occasions during the last year. Maybe its the British way. But this non compliance has certainly not helped. And there seems to be very little consequence to people that break the regulations. Even people spitting at Police Officers during arrest have escaped jail during this pandemic. 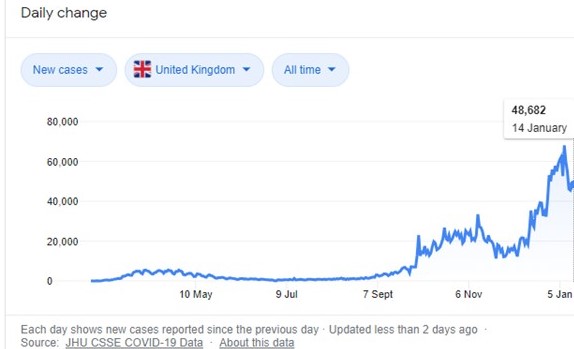 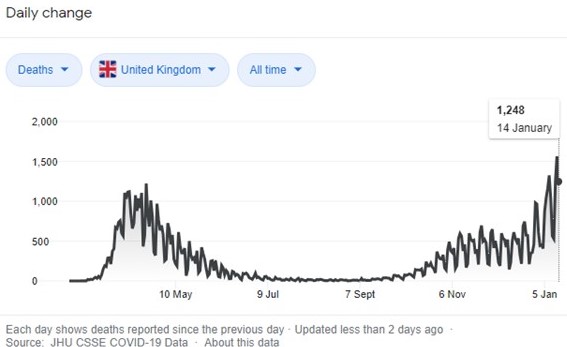 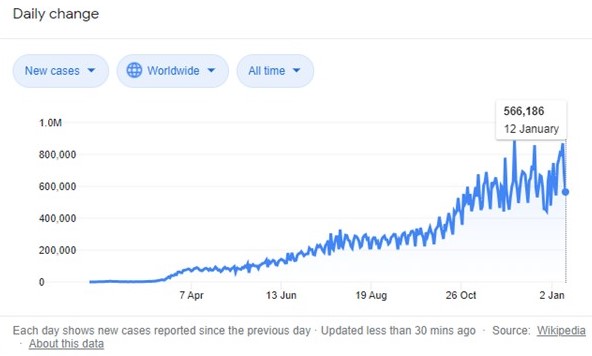 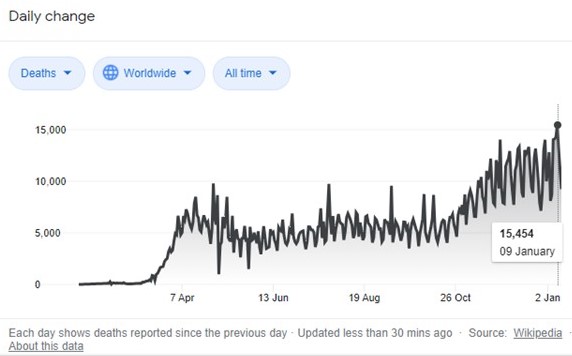 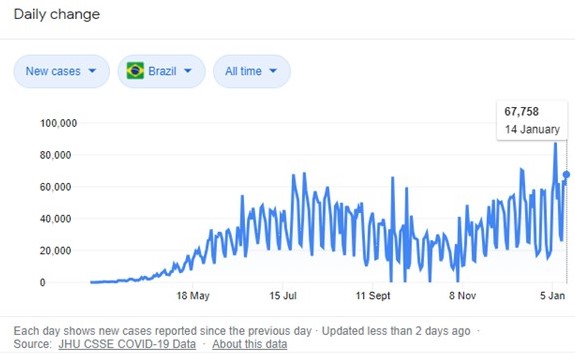 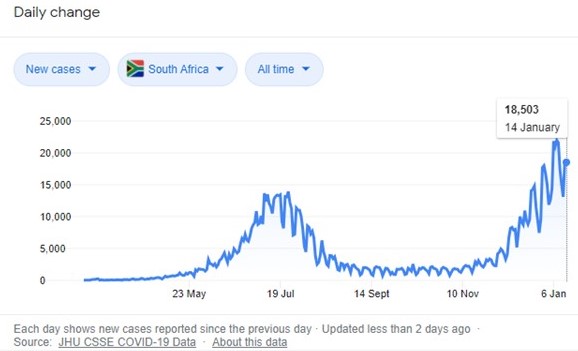 UK Global Leader In Vaccination Programme: The good news is that the UK is leading in the implementation of the vaccination programme  some 200,000 people are being vaccinated every day. The UK has vaccinated more people than the whole of mainland Europe put together by mid January. 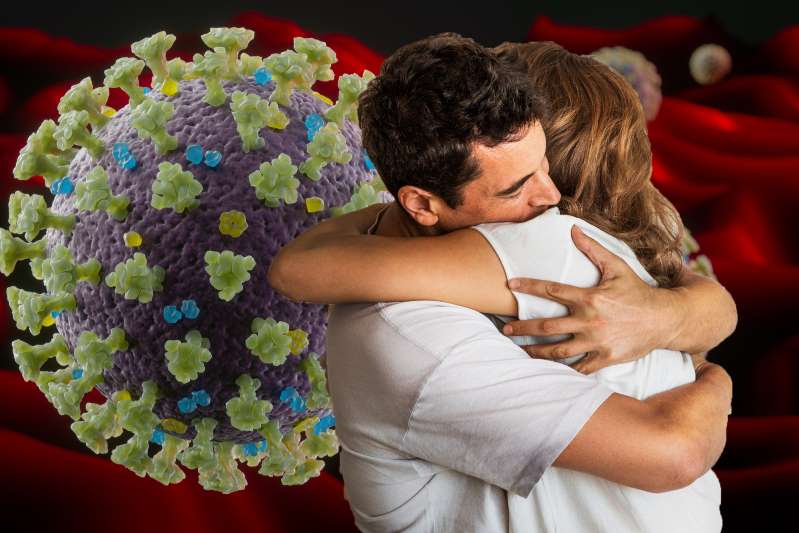 Frankly  its the only think that is going to save us from this war against the virus. Its our last ditched attempt to win the battle after all other measures seem to have failed despite repeated lockdowns, massive economic damage and 50,000 people dying. The death rate over the last years has been around 15% higher than normal  peaking to around 25% at this time. Some days about half of people are dying of COVID-19  which is a pretty awful statistic. Many of these death will be acceleration of people that were already ill  but to have a whole year with 15% additional deaths is unprecedented since World War II.

More COVID-19 Variants to Worry About: All this is context for property investors at this time. Because we are now saying that with the South African variant, the Brazil variant, no big seasonal trends, the Kent variant  and the UKs R-rating stubbornly in the range 1.2-1.6 in most regions in England  there is a significant chance that despite the lockdowns and vaccination roll-out programme  cases continue to rise. We just dint know yet. And it could keep rolling through the summer now. It does not seem necessarily to be time limited to April then dying away. It could keep at high infection levels after this. This is why the vaccination programme is so critical  to accelerate this even further  get everyone vaccinated as soon as possible. Only then will we see a big drop in infection rates.

Should Younger People Be Vaccinated First? : The other thought is that younger people (also people not wearing masks) are far more likely to contract the virus and spread it to more elderly people. So once could argue the fastest way to prevent the spread is to vaccinate young people first. Its just 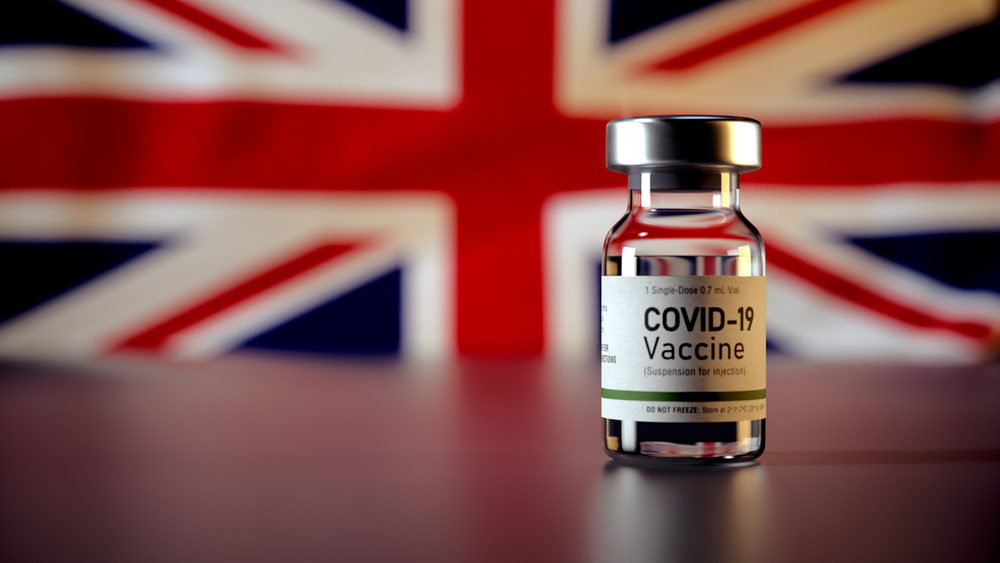 a thought. Only could strongly argue we are at a tipping point of massive crisis and the target should be reducing the infection rate by targeting younger people that are far more likely to be spreading it around in their work places and socially and at schools, universities and public transport in cities. The eventual outcome would be it would not be passed on to elderly who are largely locked way in any case and being far more compliant than the younger people.   But the main point is EVERYONE needs vaccinating as soon as possible  and its not until they get to vaccinate younger people will the infect rate drop dramatically!

The above rather counter-intuitive argument can be criticized for seeming to - initially anyway - not protect the people that are most likely to die of COVID-19 and we can fully understand this argument. To this we would put the say that saving a person who is 85 might save a few years life, though saving someone who is 35, saves that person over 50 years of life.   So if we have a very limited resource, it might be more acceptable or popular to say "lets give it to the elderly" - but they are least likely to catch the virus, least likely to spread it and have least years left of their lives. They also don't interface with other in a working (or social) environment like younger people. The argument is to tackle the underlying cause of the deaths - which is people that are infecting others first and foremost. Rather than ranking by age, may be it would be better to rank by people who have contact with other people - hospitals, schools, shops and universities could be the best place to start. 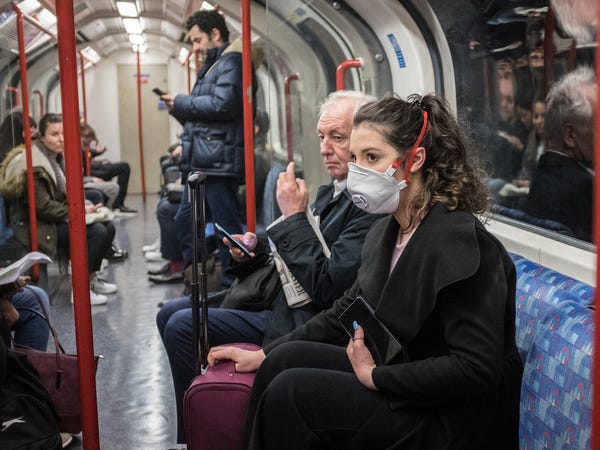 London: Once international travel starts up again in earnest  we expect floods of people wanting to settle again in London  which was again voted the most desirable city to live in globally in 2020 or a multitude of reasons.

Bleak Outlook for the Next 6 Months: It does look bleak at this time for both the house prices later in 2021 and rental market  but a successful fast vaccination programme  then rapidly falling infection rates and Lockdown easing should by mid 2021 see the UK starting the growth in earnest again. But its going to be April earliest before we start to see a markedly more positive picture. Until then  the whole country is hunkering down and hoping for the best.

Health: For those who want to mitigate the risk of contracting COVID-19  some advice:
 Regularly wash your hands
 Wear a mask when you are outside as much as pos 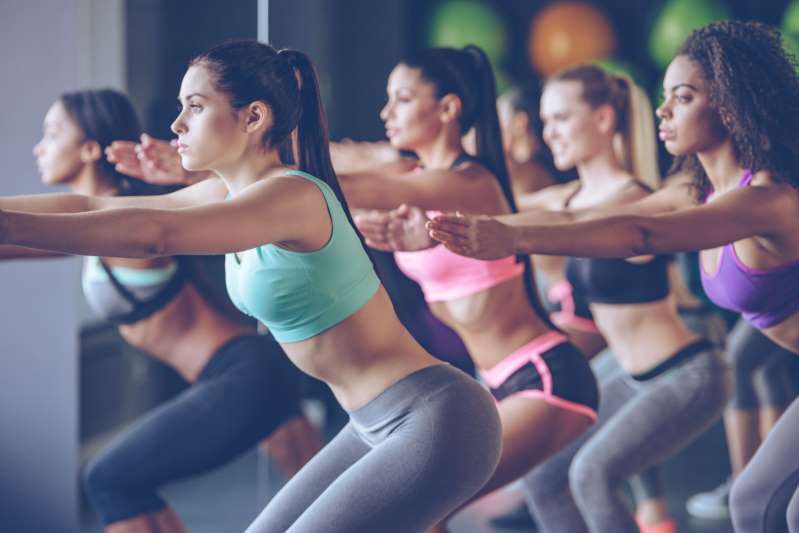 In Denial: A final comment is that we should not be in denial. Remember when the original COVID-19 broke out in China  everyone thought it was a Chinese virus (like SARS was common in the Far East) and it would not affect the UK. By November 2019 it had hit Italy  and everyone was still thinking it would not come to the UK, but it did. Now we have the Brazil variant and the South African va 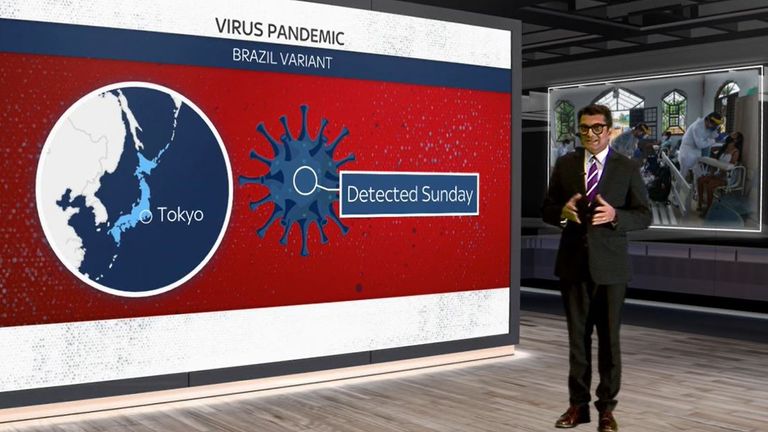 riant  plus our own Kent variant  on track record  whos to say that wont all take hold on England since we seem to attract all the worst this virus seems to throw at us. Thats another reason why the vaccination programme is so important  and we hope the government dont look back one day and think they should have started with the younger people that tend to spread it around  or prioritize all those people in both the public and private sectors that interface with other people  like shop workers, transport workers, police, health, builders, students and school children and teachers  and the homeless. This would surely stop the spread quicker than going down the age groups?  And the final outcome could be far less deaths  though one would need a good mathematical predictive statistical model to try and prove this at this time.

We hope this Newsletter has give you some good insights into the current COVID-19 crisis and impact it is having on all businesses in the UK. We hope by mid 2021 well be giving updates on other topics. If you have any queries, please contact us on enquiries@propertyinvesting.net